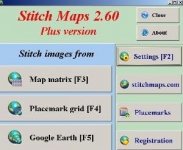 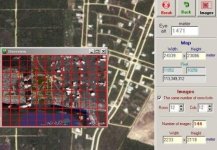 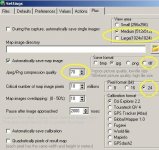 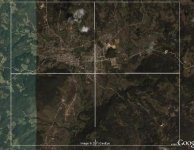 
Stitchmaps was one of the best applications that were made to create orthophotos from Google Earth captured mosaics; I spoke clip image0012 StitchMaps, common problemsabout how it works long ago.

Those like me, who did this process before manually, downloading Google screenshots and then linking them with PhotoShop or Bentley Descartes, know that Stitchmaps does much more than that. Each capture requires a special calibration with respect to the previous one; doing it manually it can be seen that each box has a small incremental rotation along a curved line, which Google does on purpose and also because it is a flat representation of the Earth’s curvature. So what Stitchmaps does is capture the stream directly from the ActiveX and calibrating it against the mosaic which makes at the beginning, cutting edges just in control nodes viewed when the calibration file is downloaded for Ozy Explorer.

That’s why Google Earth servers can not detect the download, as happened with Manifold GIS, which blocked its IP. But in this case, capture is done from the ActiveX.

After a couple of years of using it, here I answer doubts that often find there:

1. Where do StitchMaps can be downloaded?

That question remains with no answer; unfortunately the site which distributed it is not active. Perhaps because its amusement with a Google’s possible demand for distributing a commercial program that violated its terms. Blessed are those (like me) who spent an amount equivalent to carrying a pretty eyes girl to a fashion restaurant, because you can no longer buy it. Maybe we can’t see another version upper than StitchMaps 2.6 for sale, not for $ 49. Purchase would be worth while it may seem there’s availability for purchase at Shareit! but does not appear available for trial download.

Beware, the fact that no longer exists does not mean it is legal to hack it. Indeed, several of the configurations shown in this post, are only in Stitchmaps version Plus 2.6, that’s why some do not apply to versions 2.5 or earlier.

It is not a crime to use an application we bought legally. Nor is a crime download and merge Google images, whether using this program or a combination of printscreen plus a couple of scripts to cut edges and modify each image header. What is crime is to use Google images commercially without permission, so if they are to be used for municipalities where every 4 years Government’s change takes away cadastre profitability, we could say that it is not crime wlEmoticon smile StitchMaps, common problems.

Only the paid versions can save the image, the trial versions only make the catch and show how the mosaic would be.

4. With which Google Earth version does Stitchmaps work?

Works with any version, newer is recommended.

5. Why does it hang when saving the image?

This has to do in most cases because we have problems with RAM. Usually, the process runs, but just when you are saving appears a message that says “Not valid control“; then it displays a blasphemous message in German and hangs to never save the image. There are several variables that influence this, taking them into account can help us avoid overburdening memory:

It is advisable to use jpg as saved format, because even though we select the tiff, image quality will not improve, but in return it will weigh a lot of MB.
It’s recommended a size capture of 512 × 512. Similarly, choosing large areas does not benefit at all, because StitchMaps capture is the printscreen.
The recommended jpg compression quality is 70.
The recommended pixel format is 24 bits to keep the tones. Although using 16-bit does not change much.
clip image0032 StitchMaps, common problems

Is not appropriate to make mosaics too big. A 10 × 10 mosaic will go very fast, but one of 24 × 24 requires a computer’s RAM memory above 2 GB. It is preferable to download in parts, and heights round to 400 meters.
clip image0041 StitchMaps, common problems

It is important to activate the “Automatically save map image” option, so that before deploying the built mosaic it already has saved, so if it freezes it doesn’t matter.

In addition, it is recommended not have many open programs while running Stitchmaps, because load unnecessarily RAM memory. I recommend close some extra routines, using the task manager via ctrl+alt+del and close unnecessary processes such as Itunes helper, Google updater, HPutilities, Acrobat reader, etc.

To avoid each capture takes data that will after ruin the mosaic, you must deactivate the compass and Google Earth status bar. Usually happens when you have very low resolution in monitor settings, to get a piece of Google logo on each image; this is solved by expanding the splice area indicated as “Map images overlapping“. In general 10% goes well, but can carry 15 or 20 if necessary.

How to georeference the image

There are other ways to do this; one is directly with a GIS program that supports kml and image rectification. In my case I used the following procedure:

In Google Earth I draw a quadrant of the area I would like to download, using the polygon drawing and only contour as option. In case of being too big, I add additional lines to make grid.
clip image0051 StitchMaps, common problems

Subsequently, I download all the mosaic, leaving turned on the layer containing the polygon, so it will be saved embedded in final image.
Store the polygon as kml
I open it with a GIS program like Manifold GIS or gvSIG.
I assign it the projection used by Google Earth, geographical coordinates of a latitude, longitude and WGS84 Datum
Then, I modify the projection assigning it UTM and Datum of interest (example Zone 18 North, Datum WGS84)
I export it as dxf to open it as a vector file in a CAD program.
Then, in the CAD program, which can be Microstation or AutoCAD, I call the image with the ‘position it manually’ option and then warp it using corners drawn on the map as origin and as target vector polygon corners.